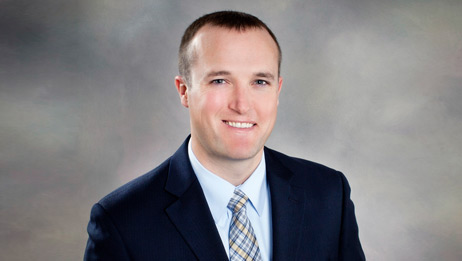 Andrew joined Guilford Orthopedics and Sports Medicine in 2015. He has spent most of his adult life here in Greensboro, NC. He attended Guilford College where he was a member of their football Team. He graduated from Guilford College in 2007 with his Bachelors of Science majoring in Sports Medicine and Health Sciences. At Guilford is where his love of sports medicine began, as he was a student athletic trainer for multiple sports teams during the football offseason that sparked his love of orthopedics and sports medicine.

After college he worked in an orthopedic clinic for over 5 years, and also spent a year and a half living in Vermont where he was an EMT on ski patrol in the winter and on mountain bike patrol in the summertime. He then moved back to North Carolina to attend PA school at Campbell University where he earned his Masters of Physician Assistant Practice. At Campbell he served as the president of his class and was awarded The Outstanding Service Award upon graduation.
He lives here in Greensboro with his wife Morgan. Andrew is active in his life enjoying the outdoors by running, mountain biking, and playing golf.